In the United Arab Emirates (UAE), one in every two households has something in common: they are customers of Mashreq. Founded in 1967, Mashreq has been one of the foremost banks in the UAE and has expanded their presence to include retail locations in Egypt and Qatar. The bank is present in 12 countries both regionally and internationally.

With almost 50 years of experience to rely on, Mashreq understands how ubiquitous fraud can be, no matter how diligent prevention experts may be. Gurcharan Chhabra, CFE, head of the fraud prevention and intelligence division for Mashreq, explained that it is because of this knowledge that they decided to become a Corporate Alliance member with the Association of Certified Fraud Examiners (ACFE). In order to best deal with fraud, Mashreq sees transparency within the industry as "one of the strongest tools in the fight against fraud." Chhabra said they are members of the UAE Banking Federation (UBF) fraud prevention committee and industry fraud forums where "emerging fraud trends and risks are shared and counter measures discussed. [We] also report fraud incidents to the regulator to enable them to respond to emerging risks and share information with the industry and law enforcement authorities."

Being the first bank in the Middle East to establish a Corporate Alliance with the ACFE has immensely helped strengthen Mashreq’s vision of zero tolerance of fraud and sent a strong message of deterrence to those attempting to defraud the bank. Gurcharan Chhabra, CFE, Mashreq

In addition to sharing information with authorities, law enforcement agencies and industry forums, Mashreq puts a heavy emphasis on internal education. The bank requires all employees to complete a fraud awareness e-learning program annually. The program goes over steps to take in reporting fraud, as well as the latest trends and risks. Mashreq’s in-house team of anti-fraud professionals use all resources available to Corporate Alliance members, as well as their knowledge from becoming CFEs to better educate their colleagues as to the risks. 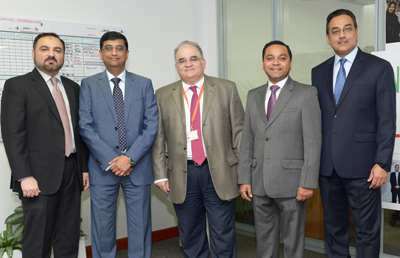 Gurcharan Chhabra, CFE, is pictured here in the far right with the management team of Mashreq's Audit, Fraud & Compliance Group. Chhabra says that partnering with the ACFE has provided Mashreq with benefits greater than just industry weight. "Being the first bank in the Middle East to establish a Corporate Alliance with the ACFE has immensely helped strengthen Mashreq’s vision of zero tolerance of fraud and sent a strong message of deterrence to those attempting to defraud the bank. While Mashreq has robust processes in place to prevent and deter fraud, the ACFE Corporate Alliance has provided unique access to leading-edge tools, training and resources in the fight against fraud."

With such a large presence in the Middle East, Mashreq continues in their fight against fraud and is one of the leaders in fraud prevention, both locally and regionally.

Read about other Corporate Alliance members
Back to top