Fighting fraud on a global scale may seem like a tall task. But, according to Istvan Deak, it all begins with values. "It all starts with clear values that are used in practice every day," said Deak, the director and head of global compliance for Maersk Oil. The Maersk Group is made up of five core businesses which include Maersk Line (the world’s largest container shipping company), APM Terminals, Maersk Oil, Maersk Drilling and APM Shipping Services. Maersk Group is a global conglomerate with more than 80,000 employees and activities in more than 130 countries.

Maersk attests to the same five core values created more than 100 years ago when a father and son team founded the company in Svendborg, Denmark. Those values, still listed on the company’s website today, include constant care, humbleness, uprightness, your employees and your name.

But even as Maersk has changed over the years, its commitment to those values has remained more than just a list on their website; it is a part of their company culture. "Maersk is ready to promote its values. The company has transformed in the last decades from being a Danish family-owned company to be a truly global diversified multinational conglomerate," Deak said. "At the same time, the values are the same."

We also value significantly the opportunity to discuss common issues with Corporate Alliance members in a confidential environment. The alliance provides us a cost-efficient solution for that as well. Istvan Deak, CFE, Maersk Oil

Deak mentioned that Denmark’s No. 1 spot (for the past four years) on Transparency International’s (TI) Corruptions Perceptions Index has bipolar implications. While it is headquartered in the least corrupt country according to TI, it still faces the same fraud risks that all global companies face. "Maersk has a global reach, so that also means that all types of fraud are relevant. It is an extra layer of challenge to consider serious fraud and corruption risk when setting up processes in a predominantly non-corrupt environment," Deak said. 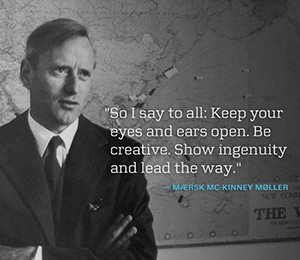 Two ways they work to mitigate fraud risk are through their Fraud Risk Services (FRS) team and a fraud risk community. The FRS was created last year by Maersk Group’s internal audit department and works to help management with their anti-fraud efforts. The team is made up of five core members: two full-time focused FRS employees and three employees that provide part-time advisory help.

According to Deak, the fraud risk community includes two to three people from each business unit. "Our aim is to extend our team with members knowledgeable about the business unit processes and environment,” Deak said. “We provide guidance to them as to how to manage investigations and how to raise awareness."

Because Maersk has offices all over the world, the way in which teams handle cases is somewhat customized. "Some [of the business units] have dedicated teams to deal with investigations and prefer to have a full global overview for their respective cases managed out of the headquarters. Some rely more on our FRS team. And in some areas, such as China, we developed local teams to address area-specific issues when language and culture knowledge is necessary," Deak said.

Another way Deak and Maersk as a company work to prevent and deter fraud is through helping FRS team members earn their Certified Fraud Examiner (CFE) credential. According to Deak, the best way for them to do this is by partnering with the Association of Certified Fraud Examiners (ACFE) through the Corporate Alliance program." All FRS members are CFEs, and we believe that the best available source of education is provided by the ACFE. We also value significantly the opportunity to discuss common issues with Corporate Alliance members in a confidential environment. The alliance provides us a cost-efficient solution for that as well."

Deak thinks that the partnership will only help their efforts now and in the future to create the awareness they have worked so hard to instill within Maersk. "Access to education, networking, awareness materials and the opportunity to discuss complex issues with peers will enhance our ability to fight fraud," Deak said. "Also, slow economy decreases our budget so we need to find creative solutions, such as developing mitigation plans together. I believe this fight can only be successful if we align our efforts. Fraud is a global issue, and we have to fight it globally together."

Istvan Deak is no longer with Maersk; however, Maersk remains an active member in the Corporate Alliance.

Read about other Corporate Alliance members
Back to top